Raymond A. Bentley January 20, 2022 Notebook app Comments Off on Weavit’s new app wants to be a “Shazam for your thoughts” – TechCrunch 18 Views

A new application called Weave wants to be a “Shazam for your thoughts” – i.e. it wants to offer people a different way to quickly capture their thoughts into a note-taking tool at the press of a button, which are then associated with other content in a broader knowledge base. Currently, Weavit can link your notes to your contacts, meetings, topics, and other web links, allowing you to jot down your ideas and other inspirations without having to first try to organize those thoughts in a more structured way.

The startup’s founders think it matches the way your brain already works.

“Every thought that we have in our mind, sometimes, is completely unstructured and just doesn’t correspond to an existing note that we have,” explains the Weavit co-founder. Komal Narwani. “You just want to throw a thought out there, and you want the machine to do the organizing for you – so you can pop that information up at a later stage and have everything nicely organized.”

To use the app, you can type or dictate your idea to enter it into Weavit’s database.

The app then uses natural language processing (NLP) technology to link certain elements of the note to people, places, events, and other topics it knows about. For example, if you write that you met someone at a certain event, such as CES, then “CES” would be identified as an event and linked to other content where “CES” was also included. (Weavit connects to over 60 million Wikipedia topics to facilitate these kinds of connections.) Additionally, the person in your note can be tagged and linked to their business, past locations or meetings, and more.

This automated form of linking makes it easier for people to draw on their own existing knowledge when writing down their ideas. However, Weavit will also support the use of common tools, like hashtag or @mention, so its users can make more manual connections as needed.

Co-founder of Weavit, Emmanuel Lefort, got the idea for the note-taking app in his past life while working at a bank. The bank was responsible for selling financial products to its customers, but the sales staff were not fully able to take advantage of the latent information that resided in people’s personal networks. He thought it would be great if there was a way to automatically connect information, automatically, without requiring manual entry into a CRM.

At launch, Weavit is not yet at the stage of connecting its users’ content to others through any distributed network – like within an internal organization, perhaps; it’s more of a long-term goal.

Instead, everything saved in your Weavit app is private and encrypted. (Data is also encrypted in transit, we’re told.)

Currently, Weavit is iOS only, and only available to users with an access code, as the startup is still in the early stages of testing.

TechCrunch readers who want to try the app can use the code “brain teaser”. 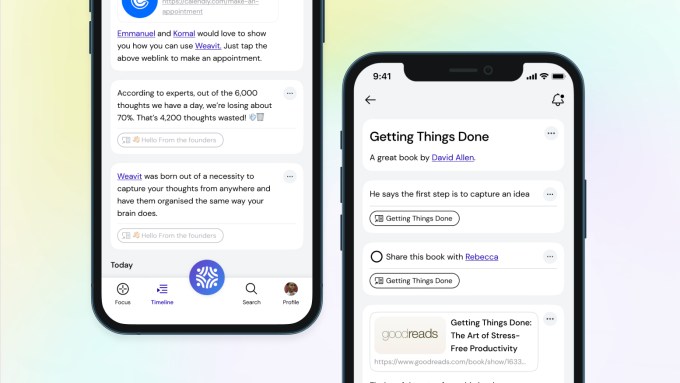 Narwani says Weavit could fill a niche by being a more accessible app amidst other tools powered by or resembling graph databases, like Traveling research Where Obsidian, which are Markdown-based knowledge management tools. While these productivity apps are more complex and powerful, that also means they’re more complicated to adopt, especially for day-to-day users who aren’t as technical. Weavit, on the other hand, could be used by anyone to not only take notes on their work or research, but also to remember, organize and link day-to-day information – like movie recommendations, names of teachers or your children’s websites. on a particular topic that you want to save for later.

The startup raised a $1.25 million seed round in 2020, led by Fluxus Ventures, and is a full-time team of six, based in Hong Kong.

Although the app’s MVP was live last year, the app was revamped and relaunched in December 2021, based on user feedback. In other words, the live app version is only a few weeks old. In its first 10 days on the App Store, the new version of Weavit saw 1,500 registrations, according to the company.

The Weavit team is also working on a web application and will soon release a Chrome extension to capture images and web pages while browsing, to make Weavit able to collect content from the web – not just your own thoughts, ideas and inspiration. An Android app is further down the road.